Sidmouth Arboretum is working with EDDC to develop a new planting scheme for Connaught Gardens on a Jurassic Coast theme. 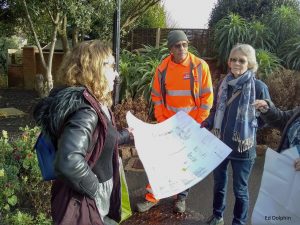 Sidmouth sits near the western end of the Jurassic Coast World Heritage Site, although our Jurassic rocks have been eroded and our cliffs are made of older rocks formed in the Triassic Period.  The Triassic, Jurassic and Cretaceous Periods was the time when flowering plants were evolving and three areas of Connaught Gardens are being stocked with plants related to these early fossil species.

Beginning with the Cretaceous Period (145-66 million years ago), which is actually when most of the large dinosaurs appeared, the eastern section of the garden has been planted with Palms, Acers and Magnolias.  These three groups are related to the first plants with true flowers where seeds are enclosed inside a carpel or fruit. 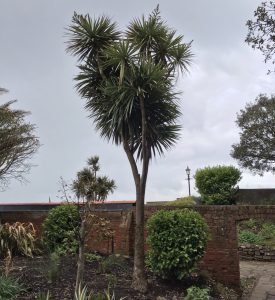 In Spring 2022, the large border beside the stage lawn will be planted with representatives of the different conifer families which evolved in the Jurassic Period (201-145 million years ago).  These plants were among the first to produce true seeds, but their seeds are open to the world in cones rather than being protected inside a fruit.  The group name for conifers is Gymnosperms which is Greek for naked seeds.  Among others, there will be dwarf varieties of Pine, Cypress, Spruce and Fir trees.

The third section, the raised lawn by the west entrance, will have the most primitive plants, relatives of plants from the Triassic Period (250-201 million years ago).  These include Cycads and Tree Ferns which reproduce by spores rather than seeds, and the most primitive seed producer still around, the Ginkgo.

The whole project is being funded by a very generous grant from the Sid Vale Association’s Keith Owen Fund for which we are very grateful.